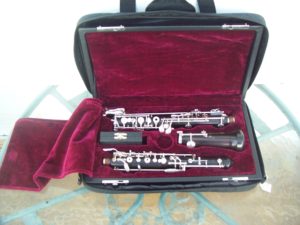 Fossati have been making oboes since the late 80’s (Gerard Fossati having learnt his trade whilst working for the Rigoutat company). He quickly established his brand in France and has been making a mark ever since. In the early days, he made many different oboes with varying amounts of mechanism until settling on the ‘Tiery’ range for students, and the ‘Fossati’ range for professionals. All his oboes initially shared the same bore and body size so were all acoustically similar, the difference being the amount of mechanism and the quality of the finish.

This one started life, in the mid 90’s, as one with fairly simple mechanism, and was imported by a music shop in St Albans where it was sent to me for additional key-work, making it more suitable for UK players of an intermediate standard. It is now equivalent to the Tiery J40 but without a 3rd octave key or the articulated B-C# mechanism.