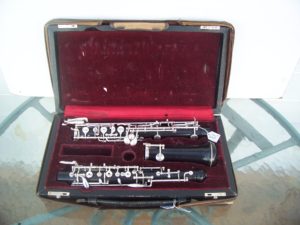 Cabart is the brand of the ‘graduate’ model made by Loree. Loree being the oldest of all the manufacturers of oboes in France. It was in the 19th century that Georges Gillet collaborated with the Loree company to develop the Gillet system oboe that is now the standard model used worldwide.

The Cabart A74 oboe is a slightly (and only slightly) simplified version of the standard Gillet system and as such is used by many amateur players and advanced students. (I have come across this model being bought as a ‘second’ or ‘back-up’ oboe by players who would normally play a professional Loree oboe).